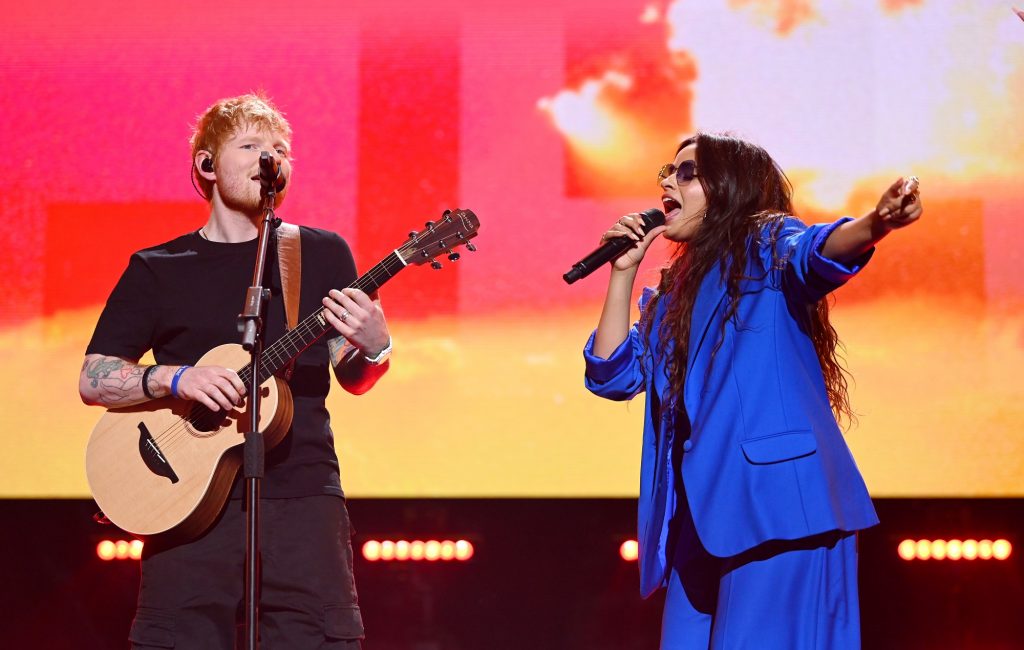 BIRMINGHAM, ENGLAND - MARCH 29: Camila Cabello and Ed Sheeran perform during a Concert for Ukraine at Resorts World Arena on March 29, 2022 in Birmingham, England. All proceeds from Concert for Ukraine are being donated to Disasters Emergency Committee's Ukraine Humanitarian Appeal. (Photo by Joe Maher/Disasters Emergency Committee/Getty Images for Livewire Pictures Ltd)

It was the first time the duo performed the song together at a benefit concert.

On Tuesday (March 29), Camila Cabello and Ed Sheeran performed their new collaboration “Bam Bam” live together for the very first time at ITV’s Concert for Ukraine.

“We’re all praying tonight for the peace and the safety of the people in Ukraine,” the former Fifth Harmony member said before surprising the crowd by welcoming Sheeran to the stage, adding, “This is such a full-circle moment for me…But, like, literally I cried the first time I met him, I’m like such a huge fan of his.”

After that, the duo jumped into the song – which has thus far peaked at No. 23 on the Hot 100 – with Cabello singing,  “You said you hated the ocean but you’re surfing now/ I said I love you for life, but I just sold our house/ We were kids at the start, I guess we’re grown-ups now/ Couldn’t ever imagine even having doubts/ But not everything works out,” in blue outfits, back up dancers flooded the stage as Sheeran played his acoustic guitar.

Cabello has previewed two more tracks from her upcoming third solo album Familia today. It will be released on April 8 via Epic Records.

Currently, Sheeran is promoting his 2021 album, which has remixes of “The Joker and the Queen” with Taylor Swift and the lead single “Bad Habits” with Bring Me the Horizon.