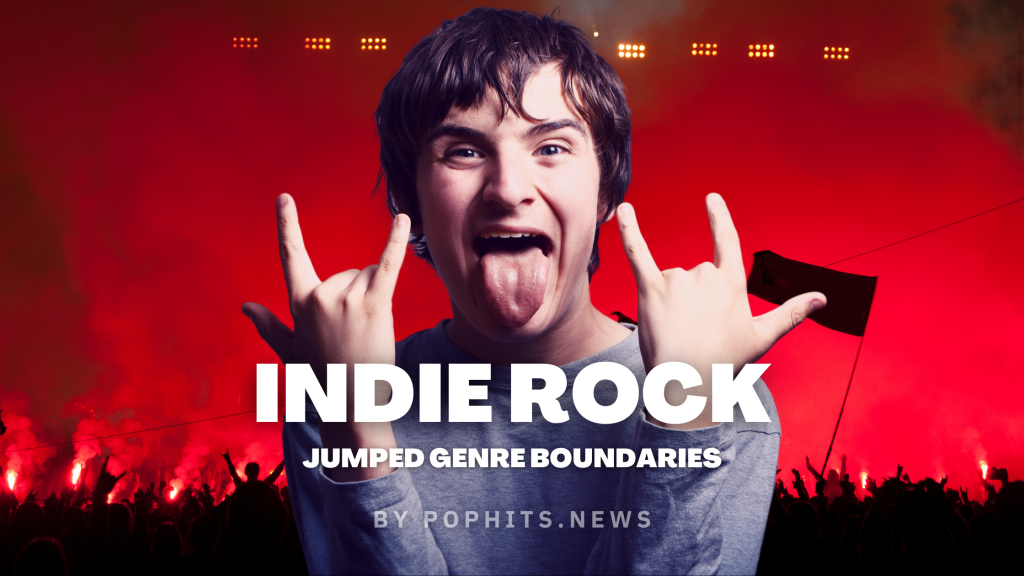 Music lovers are in love with rock music all around the world. Independent musicians and bands have created a huge impact on the music industry and have influenced many people.

Indie rock is a fusion of rock music and various genres, particularly alternative rock, pop, punk rock, hip hop and electronic music. In this article, you will read about some of the best indie rock bands who have played their part in spreading the love for rock all around.

When I think of bands like Radiohead, The Smiths and Arcade Fire, I think of them as musical artists making a statement. They are often pushing the envelope and expanding their own boundaries.

Indie rock fans have a ravenous appetite for new sounds and new ideas. Now that indie rock has spread its wings to a plethora of different genres we can see how the boundaries are being pushed even further.

To get you started on this journey through music genres that were once thought to be “indie” – but no longer – here are 10 bands that broke the mould and jumped genre boundaries.

This list of indie artists contains bands from all over the world. Each indie band brought something new to the music scene or just managed to avoid being pigeonholed into one particular style of music. Despite that, they all share a common trait – they changed musical ground and became an example for future artists.

You can listen to and like our full playlist, or check out each artist individually by scrolling down the page.

If you’re looking for something new and a little different, check out this boy, his name is RATCHET. He’s a Dutch musician who has been releasing music on Spotify since last year, and he’s got a style that is hard to define.

The tracks on his profile are just as varied as the genre tags they fall under—and they’re also all super catchy, specifically for the Bedroom Pop music!

This is definitely an artist you’ll want to check out if you’re looking for something with an experimental style; with each song coming in at around 2 minutes long and all sounding different from one another. Please don’t forget to follow the artist on Spotify.

There’s a lot of indie rock music out there, but only a few bands are willing to break the mould and jump genre boundaries. One of those bands is Trish Discord, an alternative rock band based in Queens, NY.

They released their latest album The Aftermath of 2016 today, and it’s a must-listen for fans of dark wave and shoegaze music. In my opinion, the song 23 is my favourite from the album, but it is by no means the only good song. For this reason, I recommend you listen to the whole album below.

The band also makes it a point to use female vocals in unexpected ways-something that really sets them apart and also proves they aren’t simply copying the work of other artists working in the same genre.

Their songs are cinematic and have an industrial edge that sets them apart from many other bands making similar music today. Check it out and follow them on Spotify.

You know what’s great about indie rock? It’s that it’s a genre that can be anything. You can be acoustic, soulful, groovy, with American influences, Asian or Nordic—you just have to make it happen!

And if you’re looking for some inspiration on how to do that, look no further than the band TEARS APART and their album Love.

TEARS APART is based in Turku, Finland and they’re all about making good music that doesn’t fit into any box. Their sound is a mix of soul, acoustic rock and groove with female vocals—and there’s nothing else like it out there right now!

Tears Apart is one of those bands that sounds like it came out of nowhere—but if you listen closely, it’s clear they’ve been working hard for years to perfect their unique sound. I can say their formula worked well, I recommend you to check the track called Pain, it’s my favourite.

We recommend checking them out on Spotify and following them along their journey as they continue to push the boundaries of indie music!

JANE N’ THE JUNGLE is a US-based indie rock band that released their latest single, “Dirty Dog” today. Having published their first album in early 2019 on Spotify, now it’s time for some individul singles.

The song Dirty Dog has a classic rock sound with a smoky vocal performance from lead singer. She sounds like one of those singers who could have been discovered at Woodstock (not that she would have wanted to be—she’s got too much going on).

In her single, DIRTY DOG, Jordan explains how she was sexually assaulted and “felt so gross and so small…like a dirty dog.” The lyrics were penned on a piece of paper while she was talking with Ayron Jones in a dive bar. Since then, she has found empowerment and confidence through her music.

The guitar riffs are reminiscent of the 90s grunge scene and the drums are heavy enough to make you think they’re being played by Dave Grohl himself.

This is music for anyone who loves classic rock or just wants to listen to something different than what’s on the radio these days. Check their other releases and follow the band on Spotify.

Love British hard rock, alt-rock, melodic rock, everything rock? Do you like your singer-songwriters to have a little edge to them? Then THEIA are the band for you.

The duo is based in Burton-on-Tren, England and has released their latest EP called The Day last month. The album is full of instrumentation that will make you feel like you’re in the middle of a huge crowd in the most epic festival ever.

The tone of their music is very uplifiting and make you move, but there are also some songs expressing moments where it calms down, escape the speed, and becomes less euphoric. Seriously, we just loved these guys, especilly the track The Day. It’s ready to be a superhero move’s soundtrack.

THEIA are two musicians that have been producing and releasing music on Spotify since 2015. As we can see on their profile, they started out as an indie hard rock band before branching out into their current anthemic style that’s is ready to be on the rock radios.

If you’re looking for something new and refreshing in the indie world then this album is definitely one to check out! Check their profile and follow the duo on Spotiy.

6) THE QWARKS – Dog Ate My Homework

The Qwarks are a rock band based in Brighton, UK. They released the single “Dog Ate My Homework” last month when we heard it for the first time and it’s still in my mind!

The band is a mix of alternative rock, garage rock and psychedelic sounds that is super edgy and has tons of energy. The song starts off with an ominous tone and then explodes into a crazy rush of guitar riffs, drums and male vocals. At times it sounds like a classic rock song from the 60s but then turns into something completely new.

This band is definitely not for everyone, in my opinion they are for those more nostalgic and lovers of classic rock, but you have to check by yourself and we are sure you not regret it.

So if you’re looking for something super edgy with tons of energy then check out this artist on Spotify!

7) PRESSURE – In A Dark Heart We Trust

PRESSURE is a Swedish alternative rock band, and their album In A Dark Heart We Trust is a hard-hitting journey through the musical styles of gothic, glam rock, heavy metal, and progressive rock. The group’s sound is characterized by male vocals and melodic guitar riffs that are delivered with a classic rock-and-roll sound.

Pressure started out as an indie band in Stockholm, releasing singles on Spotify in 2021, but they’ve since grown into a staple of the Swedish alternative music scene.

Their newest album was released last month and brings 14 tracks, including the In A Dark Heart We Trust that has 10 minutes and a conversation in the middle. It’s all about rock!

If you like what you hear on this album and want to hear more from PRESSURE (or if you’re just looking for some new music), check them out on Spotify!

JANA & JORGE are a unique indie rock duo from New York City. They blend the best of the singer-songwriter genre with alternative and rock, creating an easy listening sound that will make you want to just relax and enjoy life.

Their single “Run Away” is a great example of this style. The vocals are soft and breathy, while the guitar has a classic sound that evokes thoughts of 1980s love songs or even newer country-rock standards with division of voices.

During the course of research for their debut album, Jana and Izquierdo heard each other’s music online. From a young age, Izquierdo was looking for a vocalist who would bring his songs to life. The emotive voice of Jana and the extent of her music catalogue immediately caught Izquierdo’s attention and they started producing their songs remotely, between Peru and US.

The songs are written and produced by Izquierdo, but Jana uses her experience to enhance the vocal performance so that it sounds authentic and emotional. They are doing a great job!

If you like this type of music, check out JANA & JORGE on Spotify!

When you listen to TODD MORSE, you can’t help but feel like you’re listening to something new. Everything Fun (Is Bad For Me) is a punk anthem but not too hard, it’s more pop, and it will make you want to get up and dance.

The band’s sound is classic rock n roll with an edgy twist, perfect for blasting through your car speakers as you cruise down the highway. The single came after his fisrt album published on Spotify, “Late Bloomer,” which came out in 2019.

It’s been described as everything from “an anthem” to “a classic rock song,” so if you’re looking for something new, but are also open to something familiar, this is definitely worth checking out!

Check out their Spotify page so that you can follow along with all of their latest releases!

Christopher Ames Band is a band that breaks the mold of its genre. They’ve released an album called Life Outside The Machine that is a classic rock, 90’s style, and indie melodic pop rock sound all rolled into one. The vocals are classic, and the songwriting is amazing.

The band is based in Syracuse, New York, where they’ve been playing for some time. Now delivering 12 new tracks for the happiness of rock lovers.

As mentioned by the band, it’s not about music, melod, instruments, but about lyrics too.

“The latest chapter in the ongoing story, Life Outside the Machine, is a record that explores, confronts, and exposes the machines we find ourselves in (and needing to escape), as well as the ghosts that both haunt and accompany us on the journey. Stand or fall, this is the Christopher Ames Band.”

If you’re looking for something new in this genre or just want to listen to some great music from an independent artist, check out Christopher Ames Band on Spotify!