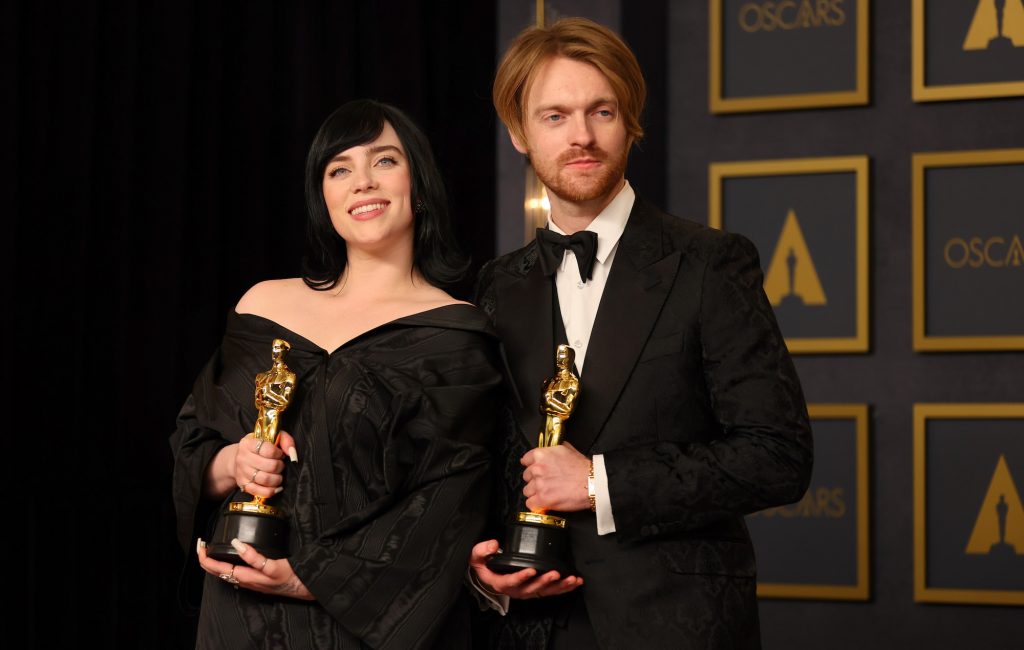 HOLLYWOOD, CALIFORNIA - MARCH 27: (L-R) Billie Eilish and FINNEAS, winners of the Music (Original Song) award for ‘No Time to Die’ pose in the press room during the 94th Annual Academy Awards at Hollywood and Highland on March 27, 2022 in Hollywood, California. (Photo by Mike Coppola/Getty Images)

“No Time to Die” is the third Bond song to win an Oscar; the first by an American songwriter.

“No Time to Die” from the James Bond film of the same name won an Academy Award on Sunday (March 27) for Billie Eilish and Finneas. First siblings to win in this category since Robert B. Sherman and Richard M. Sherman won for “Chim Chim Cher-ee” from Mary Poppins in 1964.

The song is the third Bond song to win an Oscar; it is the first written by an American songwriter. “Skyfall” and “Writing’s on the Wall” were both written by English writers.

She is the second-youngest winner ever in the category, behind only Markéta Irglová, who was a few days shy of turning 20 when she won in February 2008 for co-writing “Falling Slowly” from Once. IF COVID hadn’t occurred and No Time to Die came out on schedule in 2020, Eilish might have become the youngest winner ever in this category. In that case, she might have won the award at the Oscars in late February 2021, when she was 19 and two months old.

Both siblings were clearly delighted to receive the award. Eilish screamed, “This is so unbelievable, I could scream!” And she thanked Hans Zimmer and guitarist Johnny Marr for taking her song and making it worthy of James Bond.

Finneas paid a lovely compliment to their parents. “We love you as parents and as real people too.”

It took Oscar voters a while to embrace songs from James Bond films, but now they’ve made up for lost time. The song from No Time to Die is the third consecutive Bond movie to win the Academy Award. It follows Skyfall (Adele’s title song, co-written with Paul Epworth) and Spectre (Sam Smith’s “Writing’s on the Wall,” which he wrote with Jimmy Napes).

On the soundtrack to the film, Eilish performs “No Time to Die.”. It won the Grammy for best song written for visual media in March 2021.

Among this year’s best original song nominees, “No Time to Die” had the highest-charting Hot 100 hit. The song peaked at No. 16 in February 2020.

On the Oscar telecast, all songs except “Down to Joy” were performed. Finneas and Eilish performed “No Time to Die,” Beyoncé performed “Be Alive,” Sebastián Yatra performed “Dos Oruguitas,” and Reba McEntire performed “Somehow You Do.”

If Miranda had won, he would have become an EGOT. He has plenty of time to join this elite club, which currently has 16 members.

After being shifted to Los Angeles’ Union Station last year because of the pandemic, the 2022 Oscars will return to Hollywood’s Dolby Theatre.