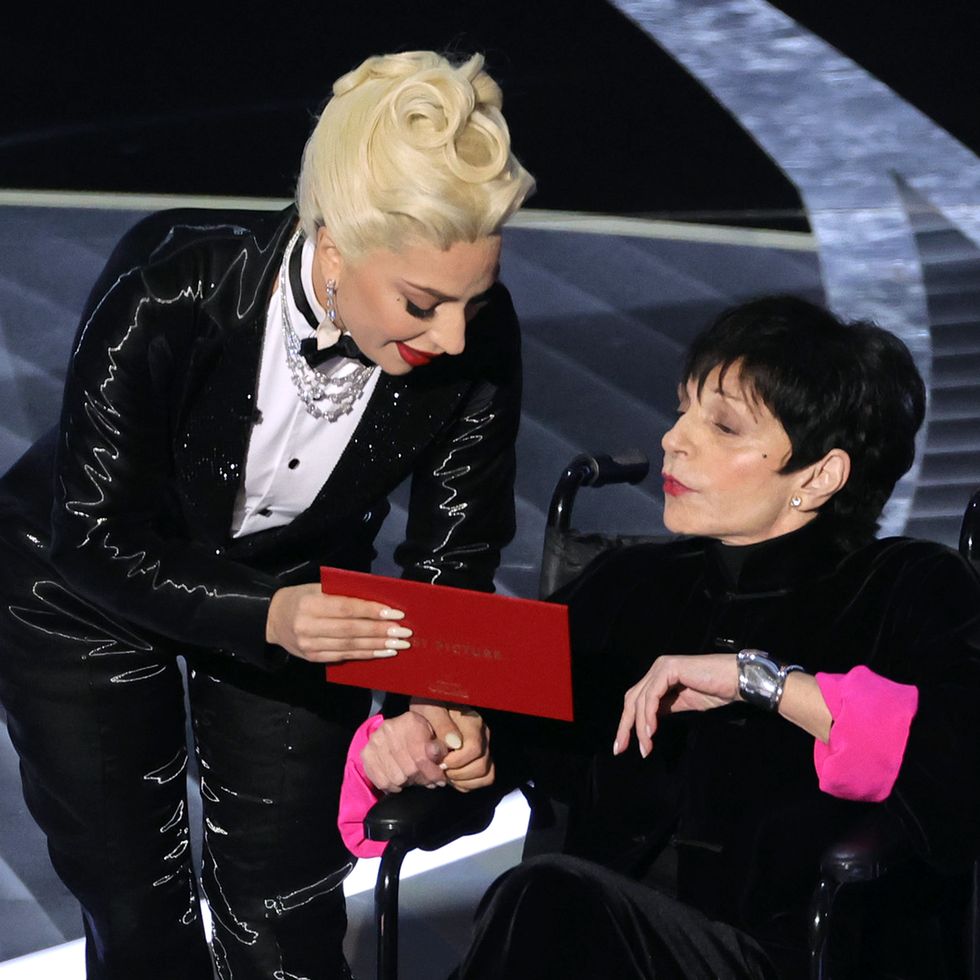 That’s correct. Liza Minnelli and Lady Gaga shared the stage at the Oscars. “I love working with legends,” Gaga said, nodding to the EGOT winner next to her as well as to Tony Bennett, with whom she’s nominated for five Grammys at the 2020 ceremony. During Gaga’s performance, Minnelli, who won the best actress Oscar for portraying the iconic role of Sally Bowles in Cabaret (1972), offered Gaga, “Oh, my baby.”

Hailing Minnelli — who laughed while squeezing Gaga’s hand — as a “true show business legend,” The 2022 Oscars telecast featured tributes to a number of anniversary films, including Pulp Fiction and The Godfather; Lady Gaga said Liza With a Z was present to celebrate the 50th anniversary of Cabaret, the 1972 film depicting a brief period of LGBTQ cultural liberation in Berlin before the Nazi takeover of Germany led to the deaths of six million Jews as well as an undetermined number of LGBTQ people in concentration camps.

“Throughout the night we’ve seen highlights of the 10 best, you know, nominated for best picture awards, now we’re gonna… tell you who it is,” Minnelli said.

During the montage of best picture nominees, Gaga – wearing a chic suit, not unlike the one Joel Grey wore in his Oscar-winning (best-supporting-actor) performance in Cabaret – performed a portion of the “Willkommen” song that opens the film.

“Hi everybody, I’m so happy to be here, especially with you — I’m you’re the biggest fan,” Minnelli said while holding Gaga’s hand.

“Are you excited to announce the best picture?” Gaga asked. “Oh yeah,” Minnelli replied. “And the Oscar goes to-” Gaga began behind Minnelli cut in and revealed, “Okay, Coda.”

The best actress winner spoke out against the backlash facing the LGBTQ community in her acceptance speech before the LGBTQ fever dream of Gaga/Minnelli on stage together.

“We’re faced with discriminatory and bigoted legislation that is sweeping our country with the only goal of further dividing us,” she said. “There’s violence and hate crimes perpetuated on individuals all over the world.” Chastain pointed to the “compassion” of Tammy Faye Messner as a “guiding principle” that can lead us forward regardless of “who we are” and “who we love.” To anyone feeling alone or isolated, “You are unconditionally loved for the uniqueness that is you.”